This is the first post in a fairly long series covering exploiting Windows kernel vulnerabilities, starting at setting up kernel debugging and continuing on through exploiting toy drivers and a real vulnerability on Windows 7 to exploiting the Windows 8.1 kernel and wherever else this series ends up.

This post is going to run through setting up and using a kernel debugger, in part 1 we’ll start looking at doing some actual exploitation.

In order to use WinDbg for kernel debugging we will be running it outside of the host machine, in some circumstances you can run it on your host machine but its far easier to just use VMs (especially when you’ll be blue screening the machine ;)). To do this we create two Virtual Machines and use one debug the other over a virtual serial port. For this series of posts I’m using a Win10 VM for debugging and an unpatched 32 bit Win7 VM as the target machine (because well, simpler times and all that) running inside of VirtualBox.

Start off by setting up the VMs as normal and then install Windows Debugging tools in your debugging VM which you can get from the Windows SDK, you won’t need debugging tools in the target VM. Once setup, you can enter the command ‘bcdedit /debug on’ in an administrator command prompt on the target VM, this makes it so that on start-up it will connect to its com1 serial port and allow another machine to connect to it and debug it.

Now we need to create a serial device for both of our VMs, power both of them off and then open their VM settings screens and change the contents of each machines serial port tab to look like the following: Now power on your debugging machine and start WinDbg, first we need to set our symbol path. Setting the symbol path means that Windows can download PDB (Programme Database) files containing the debug data which allows us to see object/function/etc names instead of just memory addresses, these are created by the linker at build time and aren’t include in the final binaries as the symbols are only needed for debugging and excluding them allows for smaller and faster binaries. This can done in WinDBG by going to the File menu and then selecting Symbol File Path and entering ‘SRV*$symbol_cache_path*http://msdl.microsoft.com/download/symbols’ in my case I use C:\symbols as my local symbol cache directory for example:

When needed WinDbg will download the symbol file for each loaded module (executable, library etc), caching them in the C:\symbols directory. At this point simply click OK and then to start kernel debugging go to File-> Kernel Debug… -> COM and click OK as shown below:

Now power on your target machine and once it has started you should see its details in the WinDbg output like so:

With all this done, we are ready to start using our debugger.

Start by going to the ‘Debug’ menu and selecting ‘Break’, this should pause the target host as can be seen by trying to use that VM (everything should be frozen). Now we can make sure that our symbols are loaded correctly by entering ‘dt nt!_TEB’ in the command box and hitting enter, the ‘dt’ command stands for ‘display type’ and can be used to see local variables, fields of structures or data type definitions. The command should give output that looks like this: 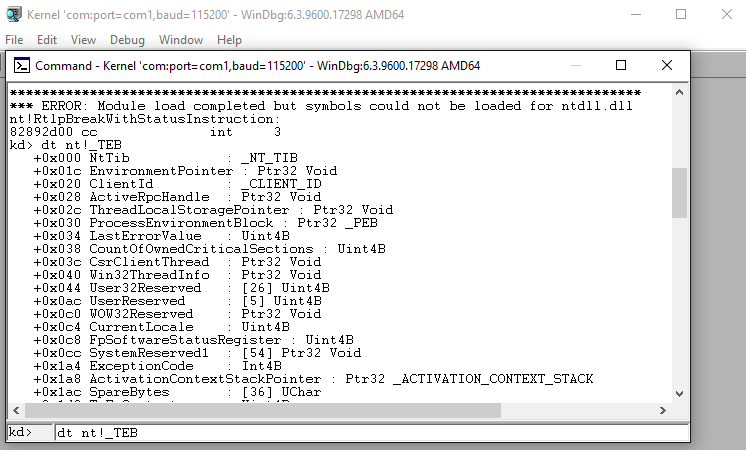 You’ll notice that this doesn’t show the structure of substructures, for example the _NT_TIB structure. We can see substructures aswell by rerunning the command with the ‘-r’ flag to recursively print definitions and ‘-r $int’ to recurse a chosen number of levels.

The TEB structure is the Thread Environment Block and it describes the state of a thread, there’s a cool visualisation of how it has changed over the years at: http://terminus.rewolf.pl/terminus/structures/ntdll/_TEB_combined.html, however it’s just a random structure I chose so we don’t need to know any more about it for now :)

The ZwCreateFile function is part of the Zw prefixed family of functions inside of ntdll.dll and ntoskrnl.exe which are light weight wrappers around system calls. The Zw doesn’t actually stand for anything but Nt and Zw calls are differentiated by the fact that Zw functions behave slightly differently when called from kernel mode code. ZwCreateFile itself is a routine which creates a new file or opens an existing one.

Now we type ‘g’ (which is short for go and resumes the targets execution) in the command window, hit enter and go back into the target VM. We then open notepad, select file then Save As and everything should freeze. Going back to our debugging VM we see that the breakpoint has been hit. We can enter the ‘r’ command to see the current register state and ‘u eip’ to view the instructions which triggered it.

Now that you’ve got kernel debugging working, go check out part 1: Getting Started With The HackSysTeam Extremely Vulnerable Driver.